CBD and Your ‘Endo-Cannabinoid’ System

CBD and Your ‘Endo-Cannabinoid’ System

Have you ever wondered how CBD oil works? The oil delivers its therapeutic benefits by interacting with the endocannabinoid system. The system regulates key aspects of human biology to maintain health and well-being.

To understand the endocannabinoid system, you should know about homeostasis. It is the concept in which most biological systems are controlled actively to maintain conditions within a specific range. The body needs to satisfy specific conditions to maintain maximum performance. One of the most important molecular systems of the body is the endocannabinoid system because it helps keep the cells in their optimal zone. 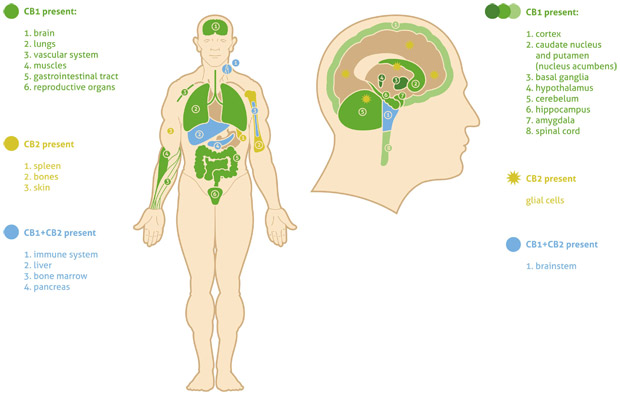 Key Elements of the Endocannabinoid System

Humans share the endocannabinoid system with all vertebrate species. The system plays a similar role in all the species because they have the same components, which are cannabinoid receptors, endocannabinoids, and metabolic enzymes.

You can find the cannabinoid receptors on the cell’s surface that allows it to monitor the conditions outside of the cell. They send the information about conditions to the cell that will make it react appropriately.

The human body naturally produces endocannabinoids. They are molecules that bind to and activate the receptors. The two major endocannabinoids are 2-AG and anandamide. They are made from molecules similar to fat within the membranes of the cell. They are also synthesised on demand, instead of being packaged and stored for future use.

You can find the three key elements of the endocannabinoid system within all the major systems of the human body. When something is not right within the cells, the three components get to action to make things right again.

HOW CBD BINDS TO THE ENDOCANNABINOID SYSTEM

Up to 1992, the endogenous cannabinoid system remained elusive to scientists. While trying to explain how marijuana produces psychoactive effects, they discovered the system present in most mammals.

Simply put, it is a communication system, with receptors and endocannabinoids found throughout the body: in the organs, brains, immune cells, and glands. Its action thus affects virtually all organs and systems. It can affect how you feel, react, move, sleep, and more. Note that the body produces its own cannabinoids, which are similar to CBC or THC.

Once they interact with the EC system, essential body functions are regulated. For instance, recreational users of cannabis have an increased appetite after use; it is caused by the introduction of cannabinoids, which affect the physiological response. Remember that the EC system is all over the body. That is why cannabis users can experience short-term memory loss and lack of coordination.  So how does CBD work in the body? How do CBD cannabinoids bind to the EC system?

How Endocannabinoids Work Uniquely from Other Neurotransmitters

The EC system is made mainly of neurons surrounded by an aqueous solution. However, they conduct synaptic signals differently. Brain cells will relay messages to and from the body by sending chemical messages through neurotransmitters such as GABA or glutamate. The chemicals released from one pre-synaptic cell journey through the synapse, which is just a small gap. The chemical reaches the post-synaptic cells, which triggers the production of more chemical messages spurring a set of events.