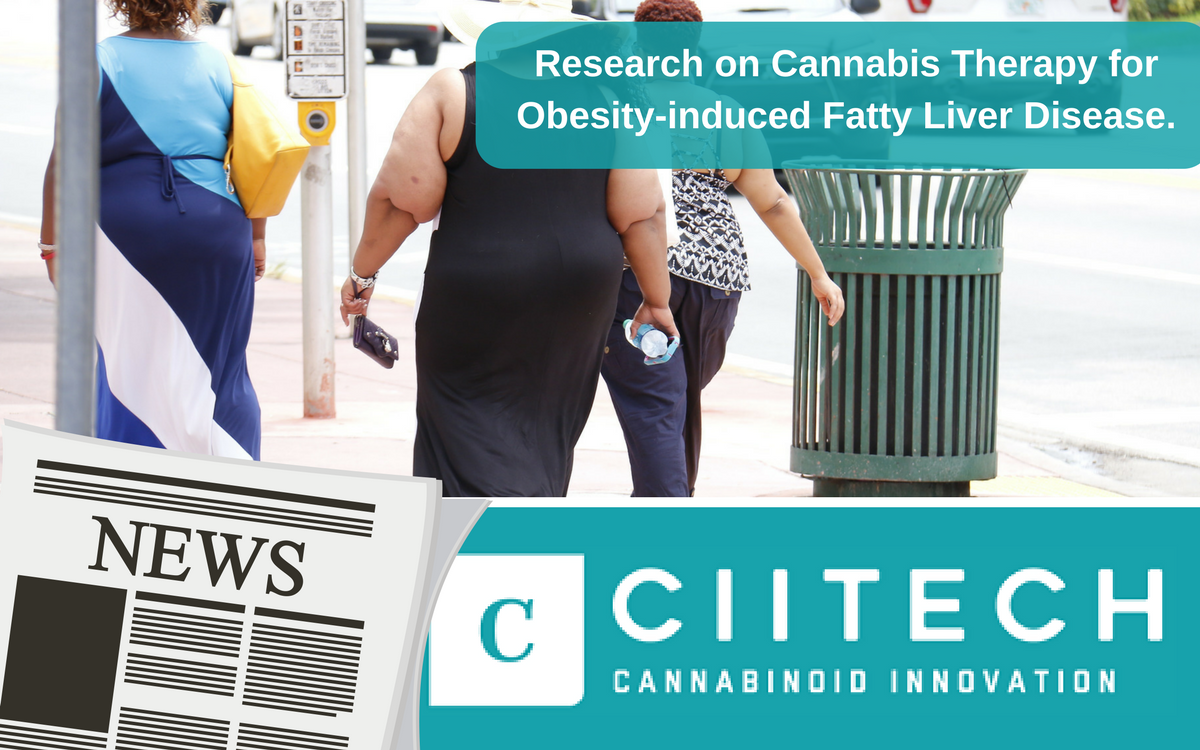 London, UK and Tel Aviv, Israel, 2 January 2018– CiiTECH, a UK-Israel cannabis biotech startup, announced today that it has selected to sponsor a research project with the Multidisciplinary Center on Cannabinoid Research of the Hebrew University of Jerusalem, focused on the therapeutic benefit of phytocannabinoids to assist in the treatment of Non Alcoholic Fatty Liver Disease (NAFLD), a common and potentially serious condition often associated with obesity, and a major cause of morbidity and mortality.

Obesity is a global epidemic. Today, more than one in two adults and nearly one in six children are overweight or obese in OECD countries. In 2015, 26.9% of adults in the UK were reported as obese, rising to 38.2% of adults in the US. While the growth has stabilized in some countries over the past decade, there is no clear sign of retrenchment of the epidemic anywhere. Up to 80% of obese people have NAFLD.

CIITECH selected to award research funding, through a non-exclusive grant competition, to the work of Dr. Joseph Tam, Head, Obesity & Metabolism Laboratory and Director, Multidisciplinary Center on Cannabinoid Research, both of which reside at the Hebrew University of Jerusalem. The Tam Lab’s groundbreaking work is focused on uncovering the role of the endocannabinoid system in obesity and its metabolic implications. This specific study will investigate whether non-psychoactive cannabis compounds including CBD can inhibit the growth of fatty liver cells.

CBD is found in both hemp and regular cannabis strains. Last year, the UK Home Office reclassified cannabis, scheduling only the psychoactive compounds of the drug. CBD is now legal in the UK, available in retailers across the country and online.

Recent studies have revealed that endocannabinoids, the biological endogenous ligands present within the mammalian body and bind to cannabinoid receptors, play a significant role in the development of NAFLD. In addition, CBD has been shown to modulate fatty acid accumulation in the liver and inhibit weight gain in rats on high-fat diets.

“We know CBD is potentially able to elicit positive metabolic effects under fatty conditions such as an unbalanced diet. What we’re exploring in this study is whether CBD and other non-psychoactive cannabis compounds can either diminish, inhibit or reverse the growth of fatty liver cells and even prevent their development,” says Dr. Tam.

The Hebrew University of Jerusalem is globally recognized as the epicenter of cannabis scientific research. Their recently established Multidisciplinary Center on Cannabis Research serves as one of the world’s leading institutes on the plant. Israel’s supportive regulatory environment and collaborative healthcare ecosystem place the country at the vanguard of therapeutic cannabis.

“CBD possesses many health benefits and with this study, we believe cannabis could usher in a new era of natural weight loss therapy” says Clifton Flack, founder of CIITECH. “There are too many people in the UK missing out because they think medical cannabis isn’t available for them. Non-psychoactive, cannabis supplements provide consumers with a real alternative option for health and wellbeing and demonstrate why countries such as the UK don’t necessarily need to legalise medical cannabis to reap the benefits.”

“As a company, our mission is to continue advancing knowledge in the science and medicinal benefits of the cannabis plant, through this research we’re able to continue innovating the most effective cannabis-based therapeutic products” said Clifton Flack.

CIITECH is a cannabis biotech company that focuses on discovering, developing and commercializing therapeutic cannabis products. By collaborating with leading research institutions in Israel and local suppliers in the UK & Europe, CIITECH leverages the full potential of Israel’s cutting-edge cannabis innovation.  Through its UK based eCommerce shop, Israeli cannabis products are available for the first time and exclusively overseas. Go to ciitech.co.uk for more info.

About the Multidisciplinary Center on Cannabinoid Research

The Multidisciplinary Center on Cannabinoid Research, staffed by leading scientists and medical doctors from the Hebrew University and its affiliated Hadassah Medical Center, conducts and coordinates exciting new research about cannabinoids, endocannabinoids, and medical Cannabis while promoting collaboration and disseminating information. More info at http://cannabinoids.huji.ac.il/