The fight for cannabis reform in the UK reaches new lows and activities.

Last week the British government published the UK Drug Strategy 2017.   Those following the UK cannabis industry will have likely been up in arms and emotionally embroiled in the political farce that concluded in an embarrassing farce during yesterdays parliamentary session.

The full report is available here

During the debate on the new gov’t strategy, Labour MP Paul Flynn demanded direct action to allow the drug for medicinal use, telling his story on how he helped someone use it on parliament grounds.  To rapturous applause from the gallery and big headlines in today’s press, Flynn told how he made a cup of cannabis tea on the House of Commons terrace – a bar overlooking the Thames flanked by royal guards and police.

“The UK drug strategy actually made no mention of medical cannabis, so this may account for the increased levels of advocacy from those who have met constituents who find relief from their symptoms by using cannabis,” said Jason Reed of Law Enforcement Against Prohibition (LEAP). 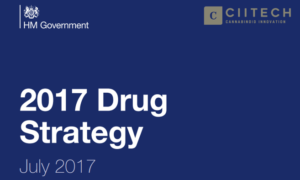 Arguments have raged in gov’t and among the liberal activists & lobbyists since the legislation was released last week.  Demanding the policy ignores the needs of ‘patients’, and tramples on the human right for patients to legally choose their own medicine.

This was not a debate about medical cannabis, this was a debate on the gov’t strategy for removing the scourge of criminality, social deviance and personal health surrounding the availability of illegal and dangerous drugs.   Whilst fair to argue that cannabis is not a dangerous drug, this was not the forum to raise the specter of the potential therapeutic cannabis offers consumers.

Cannabis legalization lobbyists have countered that buried deep in the legislation lies the ‘cloak n tails’ of the governments sinister approach to cannabis. In a statement from The Rt Hon Amber Rudd MP, current Home Secretary for struggling PM Teresa May, the government strategy is based on 4 principals.

One of the tactics to be deployed is the exploitation of the cannabis community.:

Cannabis remains the drug most likely to be used by 16 to 59 year olds with 6.5% of reporting having used this drug in the past year, however, the use of cannabis is lower than a decade ago.  Many might disagree with the validity of the gov’t sponsored research, in Israel reported cannabis use has risen dramatically in recent years though understood to be less about actual use and more about the normalization and public openness to its use.

It’s time to bring clarity to the debate, it’s time to delineate to efficiently tackle access to the plant.