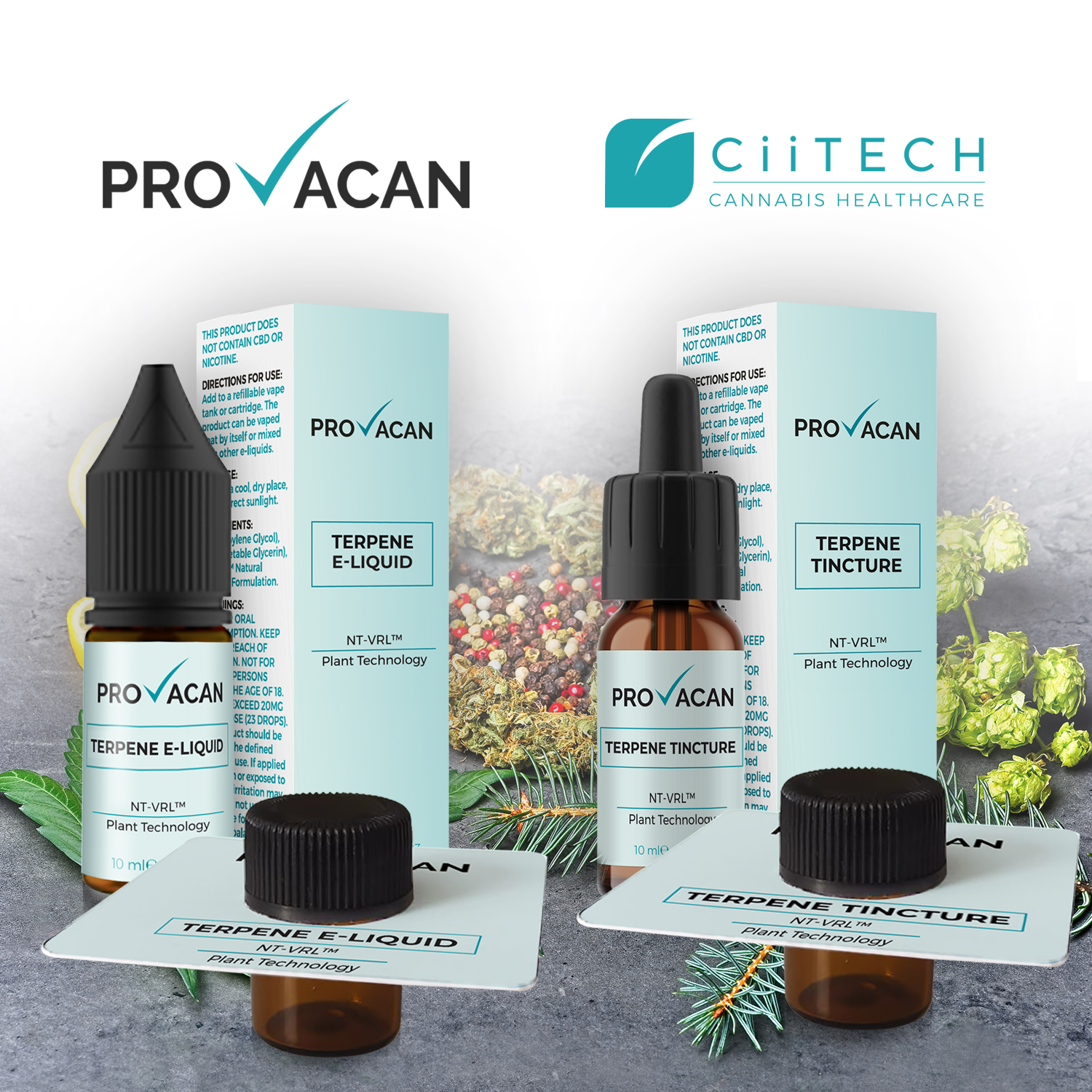 As more and more CBD businesses enter the market, customers are forced to make difficult choices about which company to work with. It’s also difficult to sort through all of the CBD products on the market and pick out the best ones because there are so many.

Provacan comes in handy in situations like this. As a market leader in the emerging CBD business as the country’s leading seller of CBD products which provides a comprehensive range of CBD products derived from hemp, including tinctures, edibles, topicals, and more.

Oil tinctures and an e-liquid are available in the new Provacan NT-VRL TM line of products, which can be used in conjunction with daily CBD intake to promote better well-being. 30 carefully selected terpenes from cannabis and other plants are included in the formula. CiiTECH’s terpene technology partner Eybna, which studies the utilization of NT-VRL alongside CBD, developed the exclusive combination.

Essential oils for aromatherapy usually contain terpenes, which are compounds found in all plants, fruits, and herbs. Combined with active cannabinoids like cannabidiol (CBD), cannabis plants contain the highest concentration of terpenes of any plant. This connection adds to the so-called entourage effect, which is a term used in the scientific community.

In the UK, the CBD market is expected to be worth over £ 3 billion by 2025, according to CiiTECH’s CEO and founder “Because the CBD industry is expanding so quickly, it’s critical that we stay on top of the latest trends. Because of our cooperation with Israeli terpene company Eybna, we can offer our consumers a differentiated offering and an enhanced wellness experience.”

For hundreds of years, terpenes have been used in aromatherapy for their numerous antioxidant properties. Provacan NT-VRL $T M$, on the other hand, has been specially developed and optimized for usage with CBD.

Hemp extract rich in nutrients The terpenes and other cannabinoids naturally found in CBD oils are being removed from the oil in favor of purer varieties of CBD. THC and regulated cannabinoids’ legal status aren’t affected by adding well selected terpene profiles to everyday CBD use. With CiiTECH’s help, we’re taking our new technology, NT-VRLTM to the UK market, where customers are eager for data-driven goods that work. The CEO and co-founder of Eybna, Nadav Eyal.

The NT-VRL is an acronym for “CannaSoul Analytics conducted Cytokine Storm inhibition testing on the M formulation in Israel. Terpenes, when mixed with CBD, have been shown to have therapeutic effects on the human body. A proven biological in-vitro model that replicates an inflammatory response in the human body was used to investigate the efficacy of the NT-VRL TM formulation. The CBD-terpene combination was found to be two times more effective than CBD alone.

The Provacan NT-most VRL’s well-known terpenes “Beta-caryophyllene, eucalyptol, citral, and myrcene are all components of the M formula. Many therapeutic features may be associated with these powerful antioxidant terpenes, including anti-inflammatory and anti-viral capabilities.